Dr hab. Krzysztof Piech - a leading expert in blockchain technology, engaged in a start-up with ambitions to give Polish science a chance to conquer global markets - talks today about the TecraCoin project.

What is the aim of Tecra?

We want to internationalise Polish science to a greater extent and create better business conditions for it.

To do this, we are working on a new model of commercialization of patents and intellectual property rights. So far, the reality in the world was like that: when someone had a patent, they sold it to some company, which used it or hid it in a drawer. We want to eliminate such intermediaries from the market by saying: "Thousands, millions of people, listen! You can buy parts of patent shares and we can introduce it to the market together.” The scientist together with the business team will be able to use the resources they have collected to carry out their project. In this way, an intermediary in the form of a large company with a financial background could disappear. This will allow ordinary people to invest in various interesting projects, which until now was possible only for large investors or funds.

Polish patents are usually financed by a native capital, which is very limited in terms of wealth. Instead of laboriously searching for it for years, we want - thanks to the blockchain technology - to go directly to investors all over the world. This is a huge experiment. Nobody has ever thought of something like that. The market is enormous and we have a chance to do something good for Polish science and business. For years, there has been a big problem in our country with bringing these two worlds closer together. I think this is the way we can finally succeed in supporting them.

‘When it comes to population and financial background, Poland and China or the USA are two different worlds, but when it comes to intellect, IQ, ingenuity - here we have no reason to be ashamed of. We are able to compete with Chinese and Americans by creating unique solutions. We have inventions in Tecra's portfolio that we have not talked about yet. These are things that can change the world more than just a graphene bulb, although it is not a simple "just" - says Prof. Krzysztof Piech.’

How will it work?

In our project, we use various types of initiatives or business schemes that already exist in the world. On the one hand, we use crowdfunding, on the other hand, a stock exchange but in addition to that we use a crypto-currency exchange plus ICO models or STO/IEO. Thus, we have a few things that need to be connected with each other very cleverly.

In general, we want to tokenize patents or other intellectual property rights. These tokenized rights or patents can be acquired through TecraCoins. Obtaining them is quite simple and all you need is a few dozens zlotys.  There are no restrictions or barriers here. The only thing  everyone has to do is to go through a sale transaction, e.g. on our website or - currently a bit cheaper - on LAtoken exchange. Eventually, everyone will be able to buy a fraction of a fraction of the ownership in any patent .

TecraCoin is a crypto-currency in which we used the MTP protocol. So we have a solid, cool technology, which is a relatively new solution used, so far, only in a few projects in the world. Our patent exchange will be based on a decentralised protocol. A centralised exchange can be created very easily as  there is a ready software for that. If someone is in a hurry, they are able to create a prototype of an exchange even in a week. Moving towards a decentralized platform will take, as we have estimated, 2 to 3 years and this is how long it will take to create it.

Patents have their own dynamics, therefore whether it will be a few months more or less it will make no difference. We are not afraid of competition from abroad, because, as I said, this is the first project of its kind in the world. It will take some time before someone else comes up with a similar idea and knows how to do it.

Are China and the United States interested in the project?

Yes, especially Chinese. The project was also presented in Taiwan, Singapore and Bangkok, and this year we will present it in Moscow, Dubai and Paris. Tecra team took into account many different technologies. For the time being, we have publicly talked only about graphene, as we have really solid solutions and we are at an advanced stage of development. In addition, there are a few other patents and licenses that we still haven't decided to talk about.

Chinese are eager to move towards graphene. Solutions developed by Polish scientists from the Institute in Wroclaw met with great interest in both countries, starting with the prototype and ending with the product ready for selling on the market. However, there is a certain way we have to go through and the Tecra team tries to shorten it. We have obtained a grant for the visualization of a graphene bulb. Currently, it is in the prototype phase but the point is to make it attractive for users, because we know that people buy with their eyes, they like modern look, design and so on. We have moved in that direction and we have the first financial successes in this field, not related to ICO - which distinguishes us in comparison to most startups in the blockchain industry in the world.

We go further along this path, combining traditional and modern ways of obtaining funds in order to raise capital and break through to companies, including those very large ones, employing several thousand people. We try to reach them as recipients of our solutions or even co-investors of projects. I hope that in the near future, Polish bulbs with graphene as a ‘filament’ - although I am simplifying the technology applied here - will be visible in operating rooms in the United States or elsewhere in the world. The interest with graphene is huge and it is really amazing what graphene actually is and where else it can be used.

Is it possible that an investor from China will come and buy most of your shares?

We do not foresee such a possibility. It would not be of, let's say, a national interest. Although, not everyone might like this approach and although we have a 50-person international team, the founders feel first of all Polish, not businessmen. But in spite of that, Chinese have expressed their interest in the project. However, we prefer that this type of technology - ownership and rights to the profits, will be on the Polish side. Yes, we are aware of the fact that someone from China might suddenly come and say: "Listen, we want your team, your ideas and so on... here's 100 million dollars for you, you have a lot of freedom of action,  what do you say?” - Yes, that would be a huge temptation. However,  after just a year of functioning we are approaching a valuation of 100 million zlotys. Maybe the USD equivalent will be reached soon and then the amount will not be a temptation for us anymore. I think that if we plan our activity - as before - for a few years, and do not focus on the quick tweaking of the "hype", as many startups do, then we will collect this one hundred million and spend it on various ideas of the Polish scientists. It doesn’t matter whether it will be  from research grants, ICO or traditional investors.

Thus, it is possible to avoid the risk of buying out Polish technical thought by Chinese - as they are mainly interested in doing that. And we, Poles, have shown that we can do things that they cannot do yet. As far as graphene is concerned, their knowledge allows them, for example, to add its particles to fabrics to make graphene t-shirts. We are much further than that. As for the population and financial background, Poland, China and the USA are two different worlds, but when it comes to intellect, IQ and ingenuity - here we have no reason to feel ashamed of. We are able to compete with Chinese and Americans by creating unique solutions. We have inventions in Tecra's portfolio that we haven’t talked about yet. These are things that can change the world more than just a graphene bulb, although it is not a simple "just".

Why is TecraCoin so low visible in the media?

This area really needs to be improved, because... I have to criticize the project I'm involved in, but this is a problem of many Polish startups, which focus mainly on technology and less on marketing. New people join our team all the time, we are still developing and we will certainly try to enter the media - mainly the international ones. For now, we have focused on our own social media, which we already have very well developed and we communicate with fans about our project in Chinese, Japanese, Korean, Russian, Ukrainian, Dutch, French, Arabic or Persian. We are visible on industry crypto portals in Poland and we have an increasingly strong international position in the world of graphene.

Showing our other inventions is just a matter of time. So far, a great interest has been noticed during presentations of graphene bulb in China,  United States and also at various conferences: ‘Please, look - we shine with a laser - we induce this  graphene ‘filament’ and it shines, please see what kind of light it is - white, almost natural, like sunlight, please look how incredible it is, how many people in the future it can help!’ There is still a lot of work ahead of us, but well - Rome was not built in a day, so all in good time.

This project is spread over the years and it is something that some people in the world and in Poland have already noticed. It is not a tweaked "hype" around the ICO, made in three months, just to sell coins in a couple of minutes, raise the price and sell them when they are up, and after that don’t worry about falling prices and leaving investors with losses. This is a project that will build its value over the years - just as the profits from patents will be visible after years, perhaps months - in the case of those at a more advanced stage. This is more for marathon enthusiasts, not sprinters, and this is what the project is all about. You can't do shortcuts, you can't do serious projects in a few months; sometimes you need to have a few years perspective for that, but well, it depends on what you like. Our TecraCoin team are not guys who are in their twenties. This is a group of people in their thirties - fourties, who have already done more than one business related to technology or IT - and this what changes our perspective. Instead of hurrying up and making hype, everything is calm. In a few months, we will finish the ICO. By then, we will have developed our marketing machine and show a few other things, not only graphene. Thus, in some time, we will be all over the news. 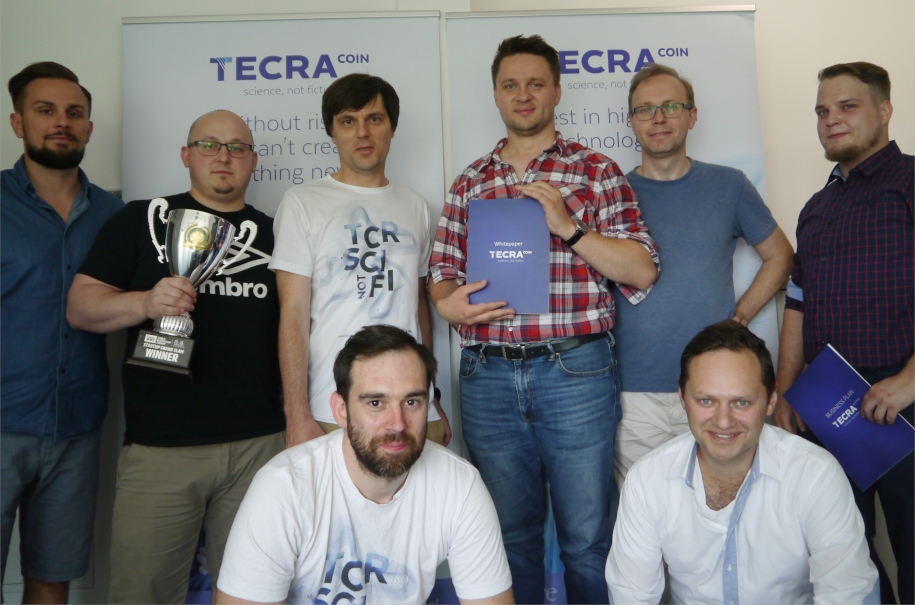 (Translation made by TecraCoin. The original text is available under this link https://cryps.pl/artykul/tecracoin-nie-tylko-zarowka-z-grafenu-krzysztof-piech-wywiad/?fbclid=IwAR1rtY5DZc7Vcp6MgXA7ntCtumtSw0dCFVB638oZnsUx4qRdnCJjU3pTw3M )